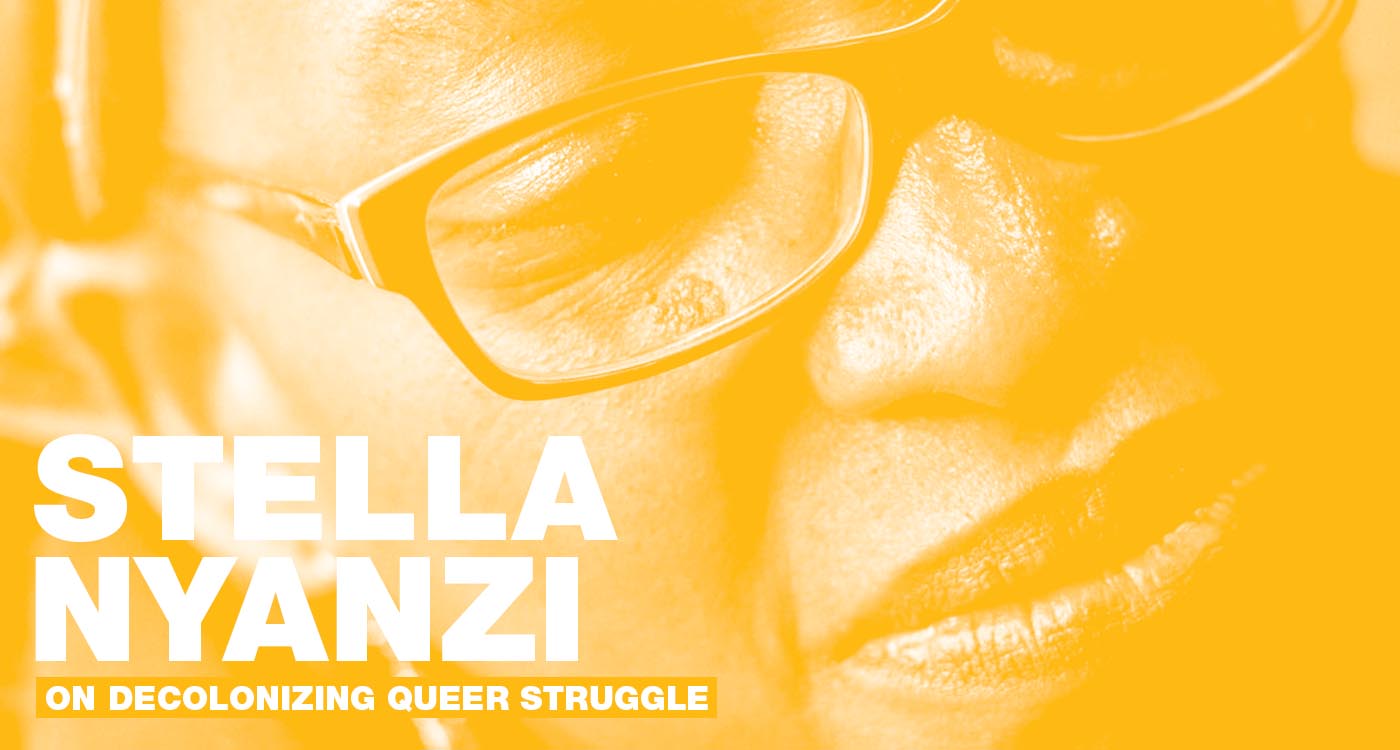 The following is the first in a series of interviews with anti-colonial activists throughout the commonwealth – a colonial geopolitical community, gravely affected by tragic laws, norms, and violence imposed upon people outside neatly defined heteronormative and cisgender identities, genders, and sexualities. Meet Stella Nyanzi, ex-prisoner, poetess, peaceful protester, published scholar, queer political activist, and feminist icon, recently exiled from Uganda.

Q: Where should we turn to understand the coloniality of discrimination and abuse of queer people?

Look to India, Nigeria, Uganda, Australia. When the UK repealed the Buggery Act in 1967, similar revocations did not take place around the world at the same time.

One of the questions for me around the fakery, or f**kery, of our times is this: when we ally with the English language of the UK, the impetus to revoke the same common law which was changed in the UK many years ago — the fire, the speed, the thoroughness — is not the same. There should be legal review, amendment, revocation, and nullification of these laws.

Part of my critique is around the duplicity of colonial partnerships. In Australia, Ghana, India, Nigeria, Uganda, South Africa — these countries have had different legal challenges with the penal code and other colonial legislations. Often when there are legal changes, additional challenges result from recriminalization.

Secondly, there is the challenge of the foreign imperialism agenda. I critique but also see the importance of calling out sexual and human rights defenders who have universalized the language and framing of queerness into a language of LGBTQIA++. In our communities, sexual identities and variations are not the beginning place for packaging nonheteronormative sexuality or nonbinary gender.

The human rights angle around sexuality and nonconforming gender ideas is very imperializing and universalizing, leading to identity performance. Militant activists across these commonwealth countries put in place organizing that fits within the LGBTQIA+ mode. Intersex identities for me are the case in point. Intersex people have duties to perform in politics, churches, mosques. Intersex people are not considered under westernized identities.

In the Ugandan context, we used to go to parliament, to various commissions and government offices and the first presentations that opened doors and created empathy started with intersex people; girls developing beards or getting erections, etc., we found an empathetic audience even among homophobes. We could start there and then move toward sexuality.

The sexualizing of children in a western approach is problematic, so our strategies made it difficult for funders and allies in the Global North to embrace how we were organizing. The erasure of the intersex “I” seems to be a dominant way of organizing in the West. One Mexican intersex person explained to me recently that they are always infantilized due to the fear of pedophilia.

Q: How can queer struggle rectify these harms?

We need to groom local expertise instead of flying in experts from the West. Even when they are full of bulls**t and lack qualifications and do not appreciate our contexts, we are hospitable to them. They prioritize their own thinking without taking time to sit down and listen and learn.

My critique is how people who organize in the UK, including gay white men, are aware of the power dynamics in their places but replicate the same hierarchies and oppressions of Ugandan fears. They often don't know what to do with cis and heterosexual people. A gay man and lesbian from the UK said to me, "How are you queer? How are you one of us?" They were questioning my sexuality and gender. But queerness is about our politics and praxis and refusing the normalization of heteronormativity and cisgenderness. So, allying with these communities in Uganda is queer politics. Holding a rainbow flag in court is queer. I'm being excluded from queer identity, which is problematic.

Q: How does race intersect with these reflections?

Another problem is the coloniality of whiteness. The continuing colonial enterprise affects us. Because of Uganda’s historical relationship with the UK, we are a protectorate. The continued protection is unacceptable. When I see a mzungu in the UK allying with a fellow mzungu in the US, they come as equals. As Ugandans we don't need more protection, we need more partnership. We may not have perfect language and resources, but the experience is ours.

Q: How do we decolonize queer struggle?

As an academic, one of the things I realize we haven't done well is our knowledge reclamation. Our histories are based on oratory, therefore our archives are created by “civilizing” bazungu (mzungu, plural), and therefore “civilized” queerdom. The UK has archives upon archives upon archives of non-heteronormative communities. We don't have the same thing happening for us in our context.

Part of the challenge is how to collaborate from a point of literature-based, archive-based celebration & oral tradition. Serious collaboration that is historical would allow revisiting the archives. This needs commitment, investment, and specific skills. All the colonial empire's archives have intersections with our own histories, although they come from a “civilizing” perspective. The second way of reclaiming written archives is giving capacity to African historians to revisit oral tradition about what happened in colonial courts when a man was found having sex with another man, for instance.

Gala Memory Project in South Africa revisits stories of mine workers who survived HIV/AIDS. It unveils what was happening between younger and older miners.

Our communities had men that never got children, women who never married (including those who had the means), and “shameful” women who never brought bride price to their families. When we describe such people, are we referring to queers?

We have trans spirit-possession, cults, etc. Cross-gender spirits request for sex with the possessed person. In Buganda, there are a number of spirit mediums who were also possessed by ancestors of the other gender who wanted sex with other possessed spirit mediums.

We miss these practices due to the demonization of African spirituality & natural medicine, which bows to western biomedicine, psychiatry, and pharmacology. When we create smoke, we ask people to evict spirits, which is contested by the civilized pharmacologist who instructs someone to take a breathalyzer and let the silver nitrates do their work. Western medicine models exclude our spirit mediums which are reached through trans people.

Q: What does queer organizing teach organizers across different issues and organizing cultures?

In terms of queer organizing throughout the commonwealth, the Stonewall Riots are important. They provoke activist models for claiming rights, recognition, and protection. But what other models exist? Bars, discos, raves, sailing: these didn’t lead necessarily to dominant political organizing models, but rather provided alternative social spaces created around booze, or around gardens and parks for cruising, around film or theatre communities where in the audience people were doing things with each other instead of going back home to their traditional heterosexual lives.

The “let’s get rainbow flags” form of mobilizing ignores that not every queer wants to be militant. Let’s organize under the radar and keep meeting and f**king and hooking up and having friendships and not engage in the war. What hasn't been explored very much is these ways of [inadvertent organizing].

Q: What anti-colonial queer people can movements of all issues learn from?

Simon Nkoli in South Africa. In the anti-apartheid struggle, he was among those that ended up in jail with Mandela. He was an openly gay man in a relationship with a white guy. There are books about his love letters. Part of the reason the ANC (African National Congress) — at the time of writing its big rainbow nation constitution during independence — included sexual orientation in its agenda was because of Simon Nkoli. He was servicing the older politicians and died of HIV/AIDS.

The most important thing to learn is that when our leaders argue that homosexuality is not African, we can resist these narratives and resist the alienation of queers. There are “big people” holding power who were not heterosexual. Even before independence struggles, our precolonial unwritten histories give us wisdom. Every year that passes, we lose out as people become old and pass away. This to me is a practice for historians that would be a game changer. Imagine if we found homosexuality was banished or publicly sanctioned in Buganda. It is painful to look only toward 1960 to be able to fight the propaganda that we are becoming an arm of imperialism by being gay. To say that David Kato who died in 2011 is the father of gay rights in Uganda is an insult. Even before 2011 there must have been gay struggles in boarding schools, for instance. Your question "what can we learn" speaks to the power of the suppression of knowledge.

Q: What do you say to those who interrogate your queerness?

No one tells the UK, “Protect the rights of your queers so we can keep giving you aid!” The inverse is true. The experiences of colonized peoples are like this

So when people question my queerness, I react with a “f**k you,” because the greatest contribution of the label queer is its invitation to go beyond heteronormative sexualities and cisgender ways of doing gender. Queerness is work that destabilizes the cis-hetero order. The queer work i do as a scholar, activist, thinker, commentator, and social media person has immense value compared to merely f**king or desiring a person of the same gender or performing a gender identity different than my sex. I find it quite a boring critique.

I face equal marginalization when I am called a lesbian. So f**k you for making me prove my queerness. My work speaks for itself. My work has shown contemporary queer practices. Even Ugandans with PhDs who are queer are not using their privilege to produce the same quantity and quality of knowledge. Giving space to the struggle is queer despite the inclinations of my private parts.