The 2019 Hong Kong protests took over global media. Hong Kongers protested an extradition law brought forth by Chief Executive Carrie Lam. This law required suspects and criminals in Hong Kong to be extradited to mainland China for prosecution. Hong Kongers continued to take to the streets, and this pressure resulted in the withdrawal of the bill. Protests continued to force Carrie Lam to step down, an investigation in the police and release of the political prisoners and this pushed on the protests further.

Is a BLOG series about the muddy waters of organising and social movement building. Every month we will release new articles focused on shifting organisers’ theory and practice for greater impact of their movements. Find more resources on organising and get in touch, share your ideas and feedback at comms@globalplatforms.org

The success of the Hong Kong protests has inspired revolutionaries worldwide to emulate their tactics. The protests that brought over three million people to the streets teach us several things, among them:

1. Tolerating differences within the opposition

Many revolutions have stumbled at their start or failed to realize their goals due to internal schisms. Differences in ideologies, values, goals, and methods give way to division. When these differences arose in Hong Kong, the people found a way to harness the power of their ideological divergences. They had seen earlier protests such as the 2014 Umbrella Movement split over conflicts on strategy. Militants and moderates ultimately did not find an agreeable way forward.

Both militants and moderates participated in the recent Hong Kong protests. Although their strategies differed, many of their goals were shared, and each benefited from the other’s momentum. As the militants attacked police cells and destroyed property, the moderates chose a peaceful approach. They chose running away from police whenever it became brutal. These groups did not condemn each other for their different approaches. They went ahead united together and later saw massive numbers of people joining them.

2. Protest in a repeated pattern

Sometimes protests fail because they come out swinging, vowing not to fall back. Often, their momentum - and thus the morale and commitment of their members -dissipates. Protestors need time and space to re-energize and re-equip themselves.

Hong Kong organisers did not demand a non-stop week-long protest. They had time to protest and spared time to rest. Many of their members returned to personal lives at the end of the day. Weekends were spared for rest. This offered time to analyse previous protests and improve the next ones. This organised schedule offered a point of entry for would-be demonstrators. At one peak, over three million people marched from Hong Kong Island’s Victoria Park to the government headquarters. This is where the legislative assembly was and as the peaceful protesters marched on. There are other angry protesters that broke into the legislative chambers and displayed graffiti over the chambers walls.

Hong Kongers built upon foreign and historical tactics, localizing them in their protests. Tactics like the “Baltic Way” that were used across the Baltic Sea in opposition to Soviet rule were adapted. Hong Kongers induced and localized this tactic by calling it the “Hong Kong way,” deploying similar human chains. This tactic help in distributing supplies to those in need. Hong Kongers also used local signs to request for a service or supplies. Two fingers in the air or three symbolized a certain supply. There were also signs that warned the protesters of any police attack or called them on to move. This kept the information flowing amongst the demonstrators in signs they would understand.

The Hong Kong protesters analyzed past tactics used by their local police. They prepared for specific forms of repression before heading to the streets.

Many protesters wore gas masks, head huts, or goggles to thwart the effects of tear gas. They carried metallic objects to shield themselves against rubber bullets. These defensive precautions also helped to hide their faces from police, who were using sophisticated technology to identify, track, and later arrest the protesters. Hong Kongers used encrypted communication apps like Telegram and airdrop to circumvent state surveillance. They used online maps with apps like HKmap to crowdsource information that tracked police movements in real time, helping them circumvent tear gas and other forms of brutality. These maps also helped the protestors to regroup after being dispersed by police. They implored a saying “be water” which meant that they had to be flexible. They used such a tactic to detect police and run away in time using trains and public services. The police would appear in the location of the demonstration when the protesters have already left.

Despite the brutality of the police and the immense use of sophisticated technology that the Hong Kong government tried to use on the protesters, their demonstrations attracted massive numbers and was propelled on to greater success. The different tactics used in these protests have surely changed the way organisers look at demonstrations. Most of these tricks were unique and many protesters have adopted them in their own protests. The Hong Kong Protests might have ended but they left new ideas for protesters to emulate. 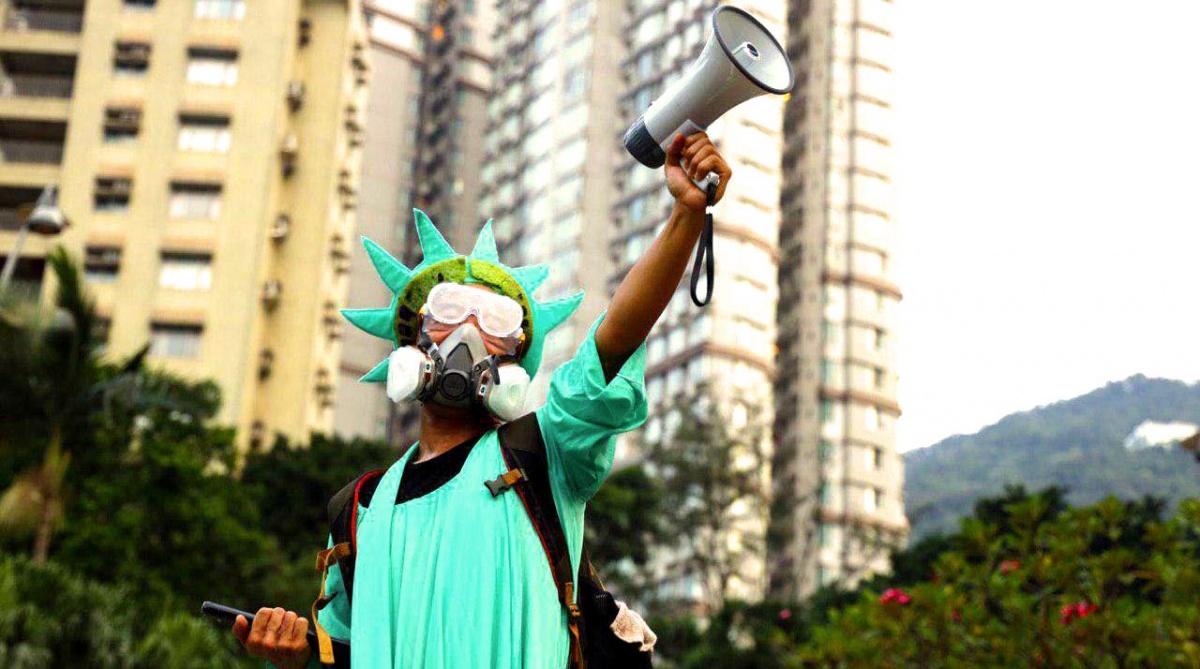 PHIL WILMOT  is a co-founder and outgoing director of Solidarity Uganda. He reports extensively on resistance movements and is author of A Wolf Dressed in Sheepskin: A White Guy’s Dilemma in a Ugandan Jail Cell. Phil lives in Uganda.